What a battery means for the performance of our raid array

A few days ago we installed a ‘Battery Backup Unit’ in our secondary storage server. This allows us to turn on the ‘Write Back Cache’. The performance impact was impressive..

Enabling the Write Back Cache means writes are committed to the raid controler’s cache (which is much faster) so you don’t have to wait for the data to be written to disk. Normally, this is a risky operation because when the power goes down unexpectedly the data in the raid controller’s cache is lost. Thanks to the battery the raid controller can finish all of its writes to the disk even there is no more power.

Have a look at the below graph. It shows the load dropped significantly after we’ve installed this battery. 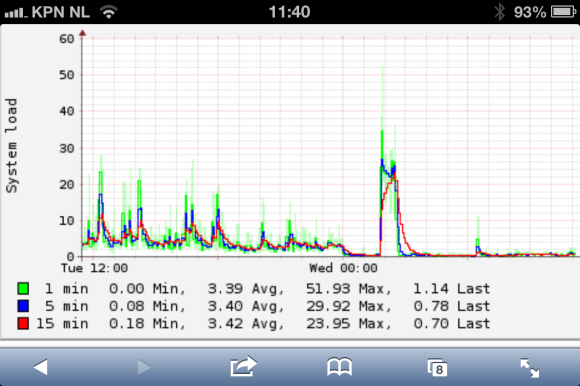 Starting on the left you see normal operations until we switched off the server around midnight. All services kept working by the way, but more about that redundancy magic in another post. The big spike around 1am was caused by syncing the data with the primary storage again after the server came online again. We had not turned on the Write Back Cache at that time. When it finished syncing, we rebooted the server once again, upgraded firmware and activated the Write Back Cache. We immediately saw an performance boost of around 20 times! The small spike around 2am was syncing with the primary storage again, but this time with Write Back Cache enabled. Our load averages now peak at 1 or 2 instead of >20.

Lesson learned: always install a Battery Backup Unit so you can safely turn the Write Back Cache on!

Be the first to start the conversation!