How accurately can the Raspberry Pi keep time?

Recently I was wondering if a Raspberry Pi would be able to run an accurate clock and provide a stable NTP service.

A virtual machine can’t do it, because its system clock has a changing drift factor. The clock compensation technique built into NTP was never designed to handle anything but a static drift factor. This is unfortunate because NTP is a light-wight protocol, so using physical hardware for it may sound wasteful. The Raspberry Pi is physical hardware with a very small footprint. So, how accurately can the Raspberry Pi keep time?

Let’s start with some background before we answer the question.

Clocks in Linux
Two clocks are important in Linux: a ‘hardware clock’, also known as RTC (Real Time Clock), CMOS or BIOS clock. This is the battery backed clock on the motherboard that keeps time even when the machine is shut down. The second clock is called the ‘system clock’, maintained by the operating system, Linux in our case. At boot time, the hardware clock is used to set the system clock and from that point onwards the system clock is used to track time. At shutdown, the system time is used to set the hardware clock as a way to ‘save’ the time between reboots. Linux uses a clocksource to maintain time, several of which exist, mostly depending on the available hardware.

Just like virtual hardware, the Raspberry Pi has no hardware clock. But it is fairly simple to add a hardware clock using the GPIO ports. In a previous blog post, I explained how to set this up.

This is a Raspberry Pi with a hardware clock

One year after setting the hardware clock, it will be 95 seconds off at max.

How Linux keeps time
Because the hardware clock is used only at system start, it doesn’t help in keeping time while the system runs. The OS needs a decent clocksource to be able to keep time. Think of the clocksource as a counter maintained by the kernel. The purpose of the clocksource is to provide a timeline for the system that tells you where you are in time. For example issuing the command ‘date’ on a Linux system will eventually read the clocksource to determine exactly what time it is.

The first command shows the current clocksource, the second all available ones.

Rasberry Pi’s clocksource
The Raspberry Pi does not ship with a TSC nor HPET counter to use as clocksource. Instead it relies on the STC that Raspbian presents as a clocksource. Based on the source code, “STC: a free running counter that increments at the rate of 1MHz”. This means it increments every microsecond.

How accurate is this STC?
Now that I have a hardware clock hooked to the Raspberry Pi, I can compare the STC clocksource (ie the system clock) to the hardware clock. First I made sure nothing is adjusting the clocksource already, or else you will not get accurate results. To double check:

Make sure these vars have their default values:

First I synced the hardware clock with the system clock and logged the point in time that I did this:

Read both the hardware clock and the system clock to verify:

The two were equal in my test. To compare the hardware clock with the system clock in a more detail, a tool called ‘adjtimex’ exists. I used it with the –compare flag to run the test, like this:

Warning: when you install ‘adjtimex’, it generates adjustment values in ‘/etc/default/adjtimex’. Make sure to reset them, like I did above or else you will get incorrect results.

Example output of the above command:

Since both clocks just synced, there shouldn’t be much of a difference. I used the following command to log these values during a few days:

This command enters an infinite loop and writes results to a logfile. Each loop takes about 2 seconds, so effectively this measures every 2 seconds the difference between the hardware clock and the system clock.

Afterwards, using some vim magic, I combined both logfiles, created a CSV from it and did most of the test analysis in Libre Office. Depending on the period you compare, you may want to filter out some records. Say you want a 1 minute interval in the rest results, instead of 2 seconds. I’ve found awk to be very useful at this:

You can see the drift is fairly static and predictable. I’ve measured every 2 seconds during roughly 59 hours.

The above chart shows the first hour in more detail.

There is a small difference between the two Raspberry Pi’s I tested, probably due to the fact the STC clocksource is entirely done in software (it does not use a hardware crystal of some kind). After 59 hours the difference is 0.242016 seconds in my test. More testing is needed to find out if this difference is consistent. It might even be caused by something else. Although I’m not sure, I wouldn’t worry too much about it

Conclusion
While the STC clocksource in Raspbian is not as accurate as a hardware clock, it does a great job in keeping time. The timedrift is linear and it has an accuracy of ~40ppm. It means the Raspberry Pi is able to keep time pretty well just on its own. This a requirement to build a solid NTP service and it is exactly what a VM cannot do. Therefore the Raspberry Pi is an interesting device to consider when planning your NTP service.

We now know what the Raspberry Pi does when it is not synced with other sources. Of course we’ll setup a system where it does sync to make sure it will drift away as little as possible. In a follow-up post we’ll continue from here in building a NTP service on the Raspberry Pi.

Adding a hardware clock (RTC) to the Raspberry Pi

The Raspberry Pi does not have a hardware clock on board. Instead, to keep track of time during reboots and downtime the ‘fake-hwclock’ package is used. It contains scripts to save the kernel’s current clock periodically (including at shutdown) and restore it at boot so that the system clock keeps at least close to realtime. Combined with NTP this is a simple, cheap and fairly accurate setup for most use-cases.

For a project at work I wanted to test a Raspberry Pi with a Real Time Clock (RTC) connected through the GPIO pins. This hardware clock needs to be very precise. I found the RasClock, by Afterthought Software, to be precise enough (about 3ppm or ~95 seconds deviation per year) while still affordable (about 15 euro).

The hardware installation is simple. Just insert the battery and place the RasClock on the last 6 GPIO ports, at the end of the board. That’s it. 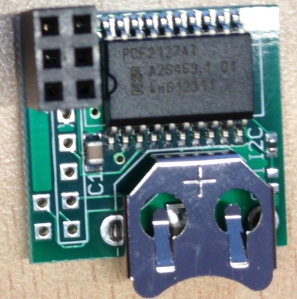 This is how the RasClock GPIO module looks like

This is the RasClock with a battery backup installed

This is the RasClock installed on the Raspberry Pi, side view

This is the RasClock installed on the Raspberry Pi, top view

This is the RasClock installed on two boxed Raspberry Pi’s

I recommend upgrading to the latest Raspbian version. At the time of writing Raspbian runs on kernel 3.6.11. By far the easiest way to upgrade firmware, is to use rpi-update.

Unfortunately the ‘rtc-pcf2127a’ module needed to operate the RasClock, is not in the default Linux kernel provided by Raspbian. Afterthought Software provides both a binary packages and source code for their forked raspberrypi/linux repository. They added an I2C driver for NXP/Philips PCF2127A device from Eckelmann AG.

To install the binary package:

The binary package is nice and quick for testing. Installing from source allows you to only build the needed kernel module, instead of a complete kernel replacement.

In the comments of the Afterthought Software site, someone posted these steps. Thanks for sharing your work!

It doesn’t matter if you install the binary package or compile the kernel module on your own. The steps below are the same either way.

Make sure to load the needed modules:

Make sure the i2c-tools package is installed:

I talked about the ‘fake-hwclock’ package. Now that we have a hardware clock, we should remove this package and it’s crons.

Enable the ‘hwclock.sh’ script (part of util-linux), instead:

It’s now time to boot the new kernel. When you reboot, the RasClock will be available as /dev/rtc0.

Because this is a new device, we need to set the time in the hardware clock. Do this by copying the system time to the RasClock.

Using the ‘hwclock’ command, you can read the RasClock:

Adding the ‘–debug’ flag adds some more interesting output, especially if you want to know exactly what goes on. Example output:

The first command returns the date, the second command the name of the chip which is ‘rtc-pcf2127a’.

In my current setup, the RasClock keeps time during reboot and when the Raspberry Pi is turned off. My goal is to build a NTP server that is capable of keeping time also when no NTP peers are available to prevent time drifts. I assume the hardware clock that I have now available is more accurate than the clocksource that drives the system time. I need to experiment to see how the two clocks compare. I’ll come back on the subject in a follow-up post.