Today I saw an awesome video of a presentation by Glenn O’Donnell.

In his presentation, Glenn states that it’s not about technology, it’s about services. Service design is modular with a logical structure. Approach it as a system and try to improve it as a whole, not just tiny pieces of it. To do that, you need systems engineers. Although most are lazy, or, as Glenn puts it: “Locally brilliant, globally stupid”.

Accept we have no full control
The whole eco system includes a lot of infrastructure and application components. Including services from third parties. We tend to zoom in a lot but then we miss the point: it’s not about the servers, the storage and the network. It’s about how it all works together. And let’s face it, we’ll not have full control over the eco system because it contains components managed by third parties.

We IT people have a hard time accepting we have no control. We think we’re the only one that can maintain that server. But in fact, software can do better and will put us out of business. That software is already out there today.

In this new world, we need people with a different skill set that can manage this complex eco system. It’s all software these days. Obviously the application is software, but so is the infrastructure on which it runs. Cloud infrastructure is all software defined. Even physical servers should be software controlled, instead of manipulating them manually.

How? Well, you can automate if you have a model. The model is a software description of reality. Tools consume this model and create reality out of it.

Glenn compares this with building a plane: first models are build and simulated before they ever put a plane in the air. Makes sense, right?

You’ll also get a better quality because human beings are bad at repetitive tasks. And it’s a waste having smart people do repetitive work. Software can do that instead. The model is the language, the secret code.

Automate yourself out of your job
Although this is cool, it does render some jobs obsolete. Glenn states that if you have “administrator” in jour job title, you’ll be replaced by software (that can do better). But don’t worry, there will be other, more interesting jobs, instead. Automate yourself out of your job. It’s fun! In short: be the automator, not the automated. 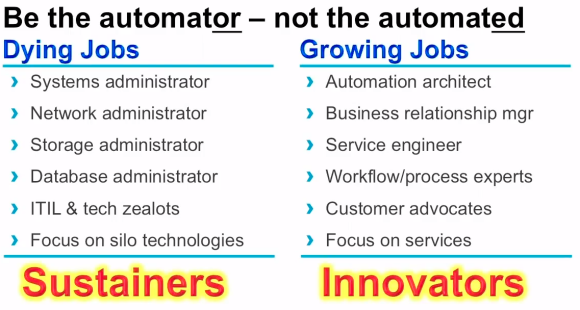 To drive this movement, we need innovators! Geeks are innovators 🙂 Geeks love change, they automate, they create, and they want to move on to the next interesting thing to discover.

Next to Geeks, there are also Geek Imposters. They might do the same job, but they hate change and want to keep everything as it is. To them, Glenn has a nice advice: “Learn to say: Would you like fries with that?“.

View the video of Glenn’s presentation:

Geeks are changing the world. If you think you are a Geek that loves change and loves automation, you could be what we call a Cupfighter at Schuberg Philis.

If you think you are a Cupfighter, please contact me and we’ll change the world 😉

Be the first to start the conversation!