Adding a hardware clock (RTC) to the Raspberry Pi

The Raspberry Pi does not have a hardware clock on board. Instead, to keep track of time during reboots and downtime the ‘fake-hwclock’ package is used. It contains scripts to save the kernel’s current clock periodically (including at shutdown) and restore it at boot so that the system clock keeps at least close to realtime. Combined with NTP this is a simple, cheap and fairly accurate setup for most use-cases.

For a project at work I wanted to test a Raspberry Pi with a Real Time Clock (RTC) connected through the GPIO pins. This hardware clock needs to be very precise. I found the RasClock, by Afterthought Software, to be precise enough (about 3ppm or ~95 seconds deviation per year) while still affordable (about 15 euro).

The hardware installation is simple. Just insert the battery and place the RasClock on the last 6 GPIO ports, at the end of the board. That’s it.

This is how the RasClock GPIO module looks like 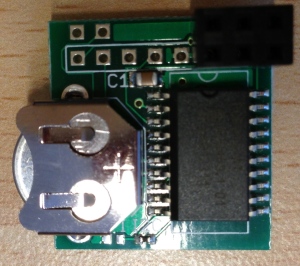 This is the RasClock with a battery backup installed

This is the RasClock installed on the Raspberry Pi, side view

This is the RasClock installed on the Raspberry Pi, top view

This is the RasClock installed on two boxed Raspberry Pi’s

I recommend upgrading to the latest Raspbian version. At the time of writing Raspbian runs on kernel 3.6.11. By far the easiest way to upgrade firmware, is to use rpi-update.

Unfortunately the ‘rtc-pcf2127a’ module needed to operate the RasClock, is not in the default Linux kernel provided by Raspbian. Afterthought Software provides both a binary packages and source code for their forked raspberrypi/linux repository. They added an I2C driver for NXP/Philips PCF2127A device from Eckelmann AG.

To install the binary package:

The binary package is nice and quick for testing. Installing from source allows you to only build the needed kernel module, instead of a complete kernel replacement.

In the comments of the Afterthought Software site, someone posted these steps. Thanks for sharing your work!

It doesn’t matter if you install the binary package or compile the kernel module on your own. The steps below are the same either way.

Make sure to load the needed modules:

Make sure the i2c-tools package is installed:

I talked about the ‘fake-hwclock’ package. Now that we have a hardware clock, we should remove this package and it’s crons.

Enable the ‘hwclock.sh’ script (part of util-linux), instead:

It’s now time to boot the new kernel. When you reboot, the RasClock will be available as /dev/rtc0.

Because this is a new device, we need to set the time in the hardware clock. Do this by copying the system time to the RasClock.

Using the ‘hwclock’ command, you can read the RasClock:

Adding the ‘–debug’ flag adds some more interesting output, especially if you want to know exactly what goes on. Example output:

The first command returns the date, the second command the name of the chip which is ‘rtc-pcf2127a’.

In my current setup, the RasClock keeps time during reboot and when the Raspberry Pi is turned off. My goal is to build a NTP server that is capable of keeping time also when no NTP peers are available to prevent time drifts. I assume the hardware clock that I have now available is more accurate than the clocksource that drives the system time. I need to experiment to see how the two clocks compare. I’ll come back on the subject in a follow-up post.